Our play festival centers on bringing emerging and mid-career playwrights together, giving each writer the time and space to create and experiment and hear their work out loud. Recent writers have included: Jessica Hagedorn, Barbara Hammond, John Kolvenbach, Lauren Yee, Clare Barron, Dipika Guha, Han Ong, Mfoniso Udofia & many, many more. It's an exciting opportunity for writers to get space and time to work, for us to get to know new playwrights and familiar playwright's work, and for our audience to meet new playwrights and new plays. We invite Magic Family patrons to join us for readings presenting new work by writers we love. 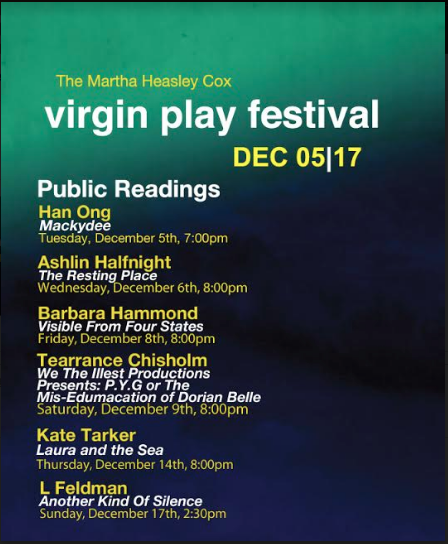 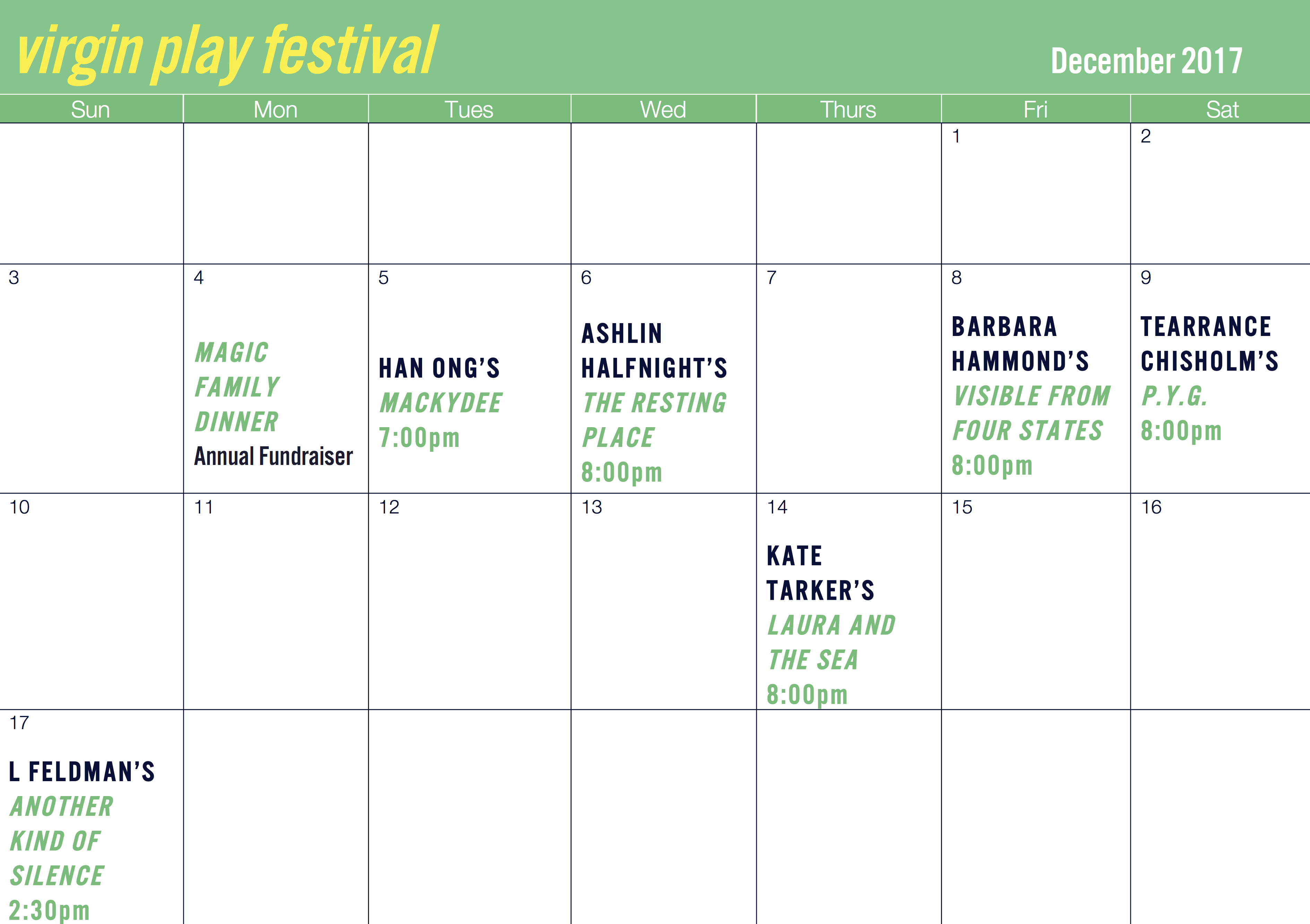 Tuesday, December 5, 7:00pm
HAN ONG’S
MACKYDEE
Based on the infamous Zombie McDonald’s in New York City, MACKYDEE shines a harsh light on the realities of being homeless on the streets of New York. This play takes a look at a day in the life of those who call the Zombie McDonald’s their home. MACKYDEE explores the dehumanization of the homeless population, the economic disparagement of race, and the continuation of hope.

HAN ONG is a novelist and playwright who recently premiered his play GRANDEUR at Magic Theatre in 2017.  Han’s plays have been widely produced in the United States at distinguished venues such as the Joseph Papp Public Theatre (New York), Berkeley Repertory Theatre (Berkeley, CA), The Mark Taper Forum (Los Angeles, CA), and The American Repertory Theatre (Cambridge, MA), and abroad at the Almeida Theatre in London.  One of the youngest recipients of the MacArthur Fellowship (1997), Han has also received fellowships from the National Endowment for the Arts, The Guggenheim Foundation, and The Cullman Center for Scholars and Writers at The New York Public Library.

Wednesday, December 6, 8:00pm
ASHLIN HALFNIGHT’S
THE RESTING PLACE
Annie returns to her childhood home for the funeral of her beloved brother.  When she discovers her family’s reluctance to celebrate his life in the way he had wished for, she begins to uncover and dissect details from his troubled and complicated past and the ways in which each of her family members were connected.  The Resting Place addresses familial obligation, guilt, mental health, and our own complacency and culpability in wrongdoing.

ASHLIN HALFNIGHT is currently a writer on the Emmy Award-winning Netflix show, BLOODLINE. His plays have been performed across North America and Europe and include ARTIFACTS OF CONSEQUENCE, A HARD WALL AT HIGH SPEED, LAWS OF MOTION, and GOD'S WAITING ROOM. Ashlin is a Fulbright Scholar, former professional hockey player signed by the NHL’s Carolina Hurricanes, a Howard Stein Playwriting Fellow, and was the 2006 artist in residence at the National Theater of Hungary, in Budapest. Ashlin holds an honors BA in English from Harvard University and an MFA in Playwriting from Columbia University’s School of the Arts.

Friday, December 8, 8:00pm
BARBARA HAMMOND’S
VISIBLE FROM FOUR STATES
In rural, middle America, a small town engages in a debate regarding the use of the space on a prominent hill, able to be seen from the highway. Would the community benefit more from erecting a large, Christian cross -- a calling to the faithful, or a large cellphone tower?  In the very same town, a young man is being sentenced to death, and the question of whether his repentance is enough to wipe away one of the most egregious sins comes into the forefront of the town. Hammond’s story examines the true nature of faith, Christianity, community, and forgiveness.

BARBARA HAMMOND is a New Dramatists Resident Playwright and is currently under commission from The Royal Court Theatre.  Barbara and her plays have won recognition, awards and funding from many national and international sources, including New Dramatists (’18), the National Endowment of the Arts, The Tyrone Guthrie Centre, The Venturous Theater Fund, the Laurents/Hatcher Foundation and the Andrew W. Mellon Foundation, as well as Yale University, the Contemporary American Theatre Festival, The Helen Merrill Foundation, Seven Devils Theatre Conference, the First Irish Theatre Festival, the Edward Albee Foundation, the Tennessee Williams One-Act Play Festival and the Kerouac Project. A member of ASCAP and the Dramatists Guild, she was named one of the Influential Women of 2011 by the Irish Voice.  Barbara recently celebrated the world premiere of her work THE EVA TRILOGY at Magic Theatre in 2017.

Saturday, December 9, 8:00pm
TEARRANCE ARVELLE CHISHOLM’S
P.Y.G. AND THE MIS-EDUMACATION OF DORIAN BELL
What happens when Canada’s biggest pop music sweetheart attempts to reinvent his image with the “help” of two of hip-hop’s baddest bad boys and broadcasts the process on cable television?  P.Y.G. explores the cultural and racial appropriation that is so prevalent in our popular music industry in this fictionalized exchange of ideologies, vernacular, and alleged street cred.

TEARRANCE ARVELLE CHISHOLM is a current member of the Lila Acheson Wallace American Playwrights Program at Juilliard and a recent MFA Playwriting graduate from the Catholic University of America. His play HOODED: OR BEING BLACK FOR DUMMIES will receive its World Premiere at Mosaic Theatre in Washington, D.C. this year and will be followed by the World Premiere of his play BR’ER COTTON at Kitchen Dog Theatre in Dallas, TX. His work has been developed with the Signature Theatre, Theatre J, Theatre Alliance, Endstation Theatre, The Kennedy Center American College Theatre Festival, the Bay Area Playwrights Festival, and the Djerassi Resident Artists Program. He was named a “Person to Watch” by American Theatre Magazine and a “Rising Star” by Variety. He was a finalist for the inaugural Relentless Award and London's 503 Theatre Award. He was named winner of both the Rosa Parks Playwriting Award and the Lorraine Hansberry Playwriting Award at KCACTF 2016.

Thursday, December 14, 8:00pm
KATE TARKER’S
LAURA AND THE SEA
A sudden and surprising death in a corporate office knocks the wind out of the other employees, who remember and relive the last moments they each spent with Laura on their corporate retreat in an attempt to process their feelings.  This quirky exploration of death, grief, and memory prompts us to examine what it means to be alive.

KATE TARKER has had works developed at The Lark, The Vineyard, The Wilma, Ars Nova, New York Theatre Workshop, the Playwrights’ Center, and The O’Neill, among others. She is the recipient of a Jerome Fellowship, The Vineyard’s Paula Vogel Playwriting Award, the National Science Playwriting Award, Theater Masters’ Visionary Playwright Award, and a PWCenter/NET Ensemble Collaboration Grant.  Tarker has completed residencies at MacDowell Colony, Tofte Lake Center, and SPACE at Ryder Farm. She is currently a member of the Ars Nova Play Group, a New Georges Affiliated Artist, and a Playwrights’ Center Core Writer. She has commissions from The Wilma and Theater Masters and collaborations with both Pig Iron and SITI Company.  As a teacher, she has mentored playwrights at the New Haven Co-Op High School and the Pillsbury House Theatre, and taught playwriting at Wesleyan. B.A. Reed College. M.F.A. Yale School of Drama.

Sunday, December 17, 2:30 pm
LM FELDMAN’S
ANOTHER KIND OF SILENCE
When Evan accompanies her composer husband to Athens for his concert, the last thing she expects is to stumble upon artistic inspiration.  But in meeting Chap, a compassionate artist/chef, Evan begins to uncover passions inside of her that have lain dormant.  Both women are currently coupled, and this bilingual-ASL play follows these four characters and a corresponding Greek Chorus of four as they confront the mysteries of desire, long-term partnership, and a changing self; alongside the challenges and intimacy of communication.