What We're Up Against

What happens when a group of architects are under the gun to design a new mall–but they can’t figure out where to place the air ducts? Theresa Rebeck returns to Magic with a bold, laugh-out-loud script by one of America’s master playwrights.

Theresa Rebeck (Playwright) made her Magic Theatre debut with the critically acclaimed 2009 production of Mauritius.  She is the author of plays produced throughout the United States and abroad.  Past New York productions of her work include Mauritius at the Biltmore Theatre in a Manhattan Theater Club Production; The Scene, The Water’s Edge, Loose Knit, The Family of Mann and Spike Heels at Second Stage; Bad Dates, The Butterfly Collectionand Our House at Playwrights Horizons; and View of the Dome at New York Theatre Workshop. Omnium Gatherum (co-written, finalist for the Pulitzer Prize in 2003) was featured at the Humana Festival, and had a commercial run at the Variety Arts Theatre. Her newest work, The Understudy, premiered at the 2008 Williamstown Theatre Festival and ran in New York at the Laura Pels Theater in a Roundabout Theatre Company production as part of their 2009 - 2010 season.  All of Rebeck’s past produced plays are published by Smith and Kraus as Theresa Rebeck: Complete Plays, Volumes I, II and III and in acting editions available from Samuel French or Playscripts.  Rebeck’s other publications are Free Fire Zone, a book of comedic essays about writing and show business. She has written for American Theatre Magazine and has had excerpts of her plays published in the Harvard Review.  Rebeck’s first novel, Three Girls and Their Brother, was published by Random House/Shaye Areheart Books in April 2008 and is available online and at booksellers everywhere. Her second novel, Twelve Rooms With A View, will be published by Random House/Shaye Areheart Books in May of this year.  In television, Rebeck has written for Dream On, Brooklyn Bridge, L.A. Law, American Dreamer, Maximum Bob, First Wave, and Third Watch. She has been a writer/producer for Canterbury’s Law, Smith, Law and Order:Criminal Intent and NYPD Blue. Her produced feature films include Harriet the Spy, Gossip, and the independent features Sunday on the Rocks and Seducing Charlie Barker, an adaptation of her play, The Scene. Awards include the Mystery Writer’s of America’s Edgar Award, the Writer’s Guild of America award for Episodic Drama, the Hispanic Images Imagen Award, and the Peabody, all for her work on NYPD Blue. She won the National Theatre Conference Award (for The Family of Mann), and the William Inge New Voices Playwriting Award in 2003 for The Bells. Mauritius was originally produced at Boston’s Huntington Theatre, where it received the 2007 IRNE Award for Best New Play as well as the Eliot Norton Award.  She is originally from Cincinnati and holds an MFA in Playwrighting and aPh.D. in Victorian Melodrama, both from Brandeis University. She is a proud board member of the Dramatists Guild. She lives in Brooklyn with her husband Jess Lynn and two children, Cooper and Cleo.

Rod Gnapp (Ben) is a graduate of The American Conservatory Theatre, and a veteran of bay area stages. He was last seen in ACT’s productions of Scapin, and Caucasian Chalk Circle.He also performed in California Shakespeare Theatre’s productions of, The Pastures of Heaven and Mrs. Warren’s Profession. Rod has performed in The Magic Theatre’s productions of Mauritius, Goldfish and Mrs Whitney. Rod’s recent film credits include, a card playing buddy in, The Miller Brothers production of Touching Home, Staring Ed Harris, and a principle bad guy in, Valley of The Heart’s Delight, a local independent feature, about the San Jose lynching, and is a featured player in Pixar’s new live action independent film Calendar Confloption.

Warren David Keith (Stu) is delighted to return to the Magic Theatre where he was last seen as Phillip the stamp store owner in Theresa Rebeck's Mauritius. Also at the Magic: The Rules of Charity and An Uncommon Vision. For A.C.T.: War Music, Tis Pity She's a Whore, Machinal, Mary Stuart and Arcadia. At Berkeley Rep: Rhinocerous and Heartbreak House. For the Aurora Theatre: The First Grade, The Devils Disciple, Hysteria, A Life in the Theatre, and Death Defying Acts. In 2010 Word for Word's production of Olive Kitteridge. At the Marin Theatre Company: The Good German Life times Three and Indiscretions. For the California Shakespeare Theatre: Henry IV (Parts 1 & 2), Much Ado About Nothing and A Winter's Tale.  And at TheaterWorks: Spinning Into Butter, The Learned Ladies at Park Avenue, and Twelfth Night. His Film credits include: A Serious Man, The Big Lebowski, Fargo, Raisn Arizona, Haiku Tunnel and Moonlight Sonata.

Sarah Nealis (Eliza) is making her  Magic Theatre debut and she feels very blessed to be here.  Originally from the Bay Area, she received her BA from UC Berkeley and has performed at such theatres as Cal Shakes, San Jose Rep, Center Rep, Word for Word, Aurora Theatre Company, Lake Tahoe Shakes, and understudied Loretta Greco's A.C.T. production of Speed The Plow.  Regional theatres include the Huntington, Actors Theatre of Louisville, the Cleveland Playhouse, Syracuse Stage and an upcoming production of The 39 Steps at Indiana Repertory Theater.  A proud member of Equity, Sarah now lives in New York City.

James Wagner (Weber) is thrilled to return to The Magic.  He was most recently seen inSecret Order at San Jose Rep. Regional Credits include Mauritius at The Magic Theatre, A Christmas Carol at the American Conservatory Theatre, Betrayed and The Busy World is Hushed at the Aurora Theatre, and Beauty and the Beast at the B-street theatre. Other theatre credits include Candida,  David Copperfield,  A Midsummer Night’s Dream, The Reluctant Doctor, Telephus, The Rainmaker, The Best Little Whorehouse in Texas, The Glass Menagerie, The Flying Doctor, Mother Courage, How to Succeed in Business, History of the American Film, and Our Town.  He has created and performed two solo shows: Toll Roads,Where’s the Sense in That? & is working on a third called The Resurrection of Antonin Artaud. His list of 30 short and feature film credits include lead roles in The Invisible Forest & To Dreams of Falling Upward by Antero Alli. Wagner has an M.F.A. from The American Conservatory Theatre. 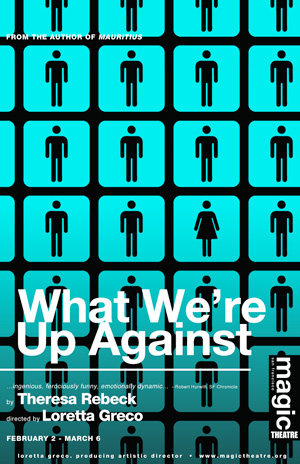