THIS GOLDEN STATE
PART ONE: DELANO

Pastor Elias and his wife Esther have returned to Delano to take over a congregation that is struggling: crumbling traditions, broken marriages and somebody keeps forgetting the salt for the tamales. In Part One of the This Golden State Trilogy, co-commissioned with the Oregon Shakespeare Festival, Magic’s beloved Luis Alfaro (Oedipus el Rey, Bruja) uses music, myth, and his undeniable mix of humor and heart to look at our search for meaning of faith and community.

"One of the most anticipated plays of the year."

“Even before a fiery Sean San José opens “This Golden State — Part One: Delano” in mid-full-throttle Pentecostal fervor, you can’t help but notice that the Magic Theatre has been transformed into a church.”

“Staged by Artistic Director Loretta Greco, with easy, flowing segues that belie and heighten its intensity, “Delano” is a gripping dive into lives that go largely unnoticed outside its immediate area…”

THIS GOLDEN STATE – Part One: Delano

“it's an engrossing, uplifting play because of the humanity and resilience of its characters.”

“What’s amazing is how vital Alfaro makes a crisis of faith feel, whether you share that faith or have never given it a second thought.”

Wilma Bonet* (Hermana Cantu)
is delighted to be back at Magic after last being seen here in Bruja. Recently, she performed in "The Tenth Muse" and "A Streetcar Named Desire" at the Oregon Shakespeare Festival,  Lydia at Marin Theatre Company, El Otroat Thick Description and Too Big to Fail with the San Francisco Mime Troupe. She has performed at the Mark Taper Forum in Luis Alfaro’s Electricidad and at the Denver Center Theatre Company in September Shoes. Ms. Bonet was a collective member of the Tony Award-winning San Francisco Mime Troupe for 7 years and toured with the company internationally. She has appeared at San Jose Repertory, San Jose Stage Company, American Conservatory Theatre, Campo Santo, California Shakespeare Festival, Berkeley Repertory Company, Dallas Theatre Center and El Teatro Campesino. Her one-person playGood Grief Lolita toured the Bay Area and has been published inPuro Teatro: A Latina Anthology.  Film and television credits:What Dreams May Come, 8MM, Underwraps, Jack, Radio Flyer, and Nash Bridges. Awards: Marion Ross Award for Good Grief Lolita, Bay Area Critics Award and a Drama-logue Award for outstanding performance (SFMT), the Goodman Award for performance in Mere Mortals at MTC and in Hotel Angulo at Campo Santo.

Carla Gallardo (Romie)
This is Carla’s first time working at Magic Theater, and is very excited to be a part of this experience. She is an aspiring young actor, studying theater arts at San Francisco State University with an emphasis in performance. She transferred from Laney College, where she became involved in acting with the Laney Fusion Theater Project, where she played the White Rabbit, the Mouse, and the Two of Hearts in Jackie Graves’ Alice in Oaksterland, Bluebell in Jon Tracy’s The Farm, and a Siren and the Mistress in Laney Fusion Theater’s The 510’s, all directed by Michael Torres. She also wrote one of the plays for The 510’s.

Rod Gnapp* (Brother Abel)
A veteran of Bay Area stages, Mr. Gnapp was last seen at Magic in Every Five Minutes, Buried Child and Se Llama Cristina.  He recently appeared in Storefront Church at the SF Playhouse and The Beauty Queen of Leenane at Marin Theatre Company.  Theatre credits also include work at American Conservatory Theater, Berkeley Rep, California Shakespeare Theater, San Jose Rep, Aurora Theatre Company, TheatreWorks, the Huntington Theatre Company, Brooklyn Academy of Music, Seattle Rep, Virginia Playhouse and the Pittsburgh Public Theater.   Mr. Gnapp can be seen in the independent feature film Touching Home by the Miller Brothers, with Ed Harris. He can also be seen in Valley of the Hearts Delite, Calendar Confloption (Pixar), and Return to the Streets of San Francisco.  He is the recipient of many Bay Area Theatre Critics Circle (BATCC) Awards and is a graduate of the American Conservatory Theater's MFA program.

Armando Rodriguez* (Moises)
is honored to be back at Magic Theatre working again with Loretta Greco and Luis Alfaro where he was last seen in Bruja and Oedipus El Rey. Originally from San Antonio, Texas, Mr. Rodriguez received his BFA from Carnegie Mellon University, and moved to NYC residing there for nine years before moving to San Francisco. Armando’s credits include: Paper Doll at the Pittsburg Public, working with F. Murray Abraham and Marlo Thomas, What a Little Moonlight Can Do at Theatre 22, and Flackat Raw Space. Armando can be last seen in a cameo appearance in the film Beyond Redemption, shot in the hills of Petaluma.  Armando would also like to thank his family and friends for their everlasting support.

Sean San José* (Elias)
is honored to continue working with Luis Alfaro, Loretta Greco and Magic Theatre having been part of several premieres in recent years.  San José is a proud member of Campo Santo- a new performances company here in San Francisco, who premiered Alfaro's piece Alleluia, The Road with Intersection and California Shakespeare in 2013. camposantosf.org

Julie Haber* (Stage Manager) is thrilled to return to Magic Theatre after stage managing last season's Arlington. Other Magic shows include Se Llama Cristina, Jesus in India and Bruja. She has stage managed at many regional theatres around the country, including the past four summers at Santa Cruz Shakespeare (formerly Shakespeare Santa Cruz). She served as Administrative Stage Manager at American Conservatory Theater for three years and as Company Stage Manager at South Coast Repertory for 20 years, stage managing over 80 productions and overseeing the stage management departments. She enjoys doing children’s theatre at Mainstreet Theatre Company, and she has also stage managed two operas: Don Juan in Prague (in Prague and at BAM), and Guest from the Future (Bard SummerScape). She received her MFA from Yale School of Drama and has taught stage management at UC Irvine (where she received her BA), UC San Diego, Cal Arts and Yale School of Drama. Julie is a proud member of Actors Equity.

Jake Rodriguez (Sound Designer) has carved out sound and music for multiple theaters across the Bay Area and beyond. This is Jake’s third World Premiere at the Magic Theatre featuring playwright Luis Alfaro and director Loretta Greco, having previously worked on Oedipus el Rey and Bruja. Other recent projects include Mr. Burns, a Post-Electric Play at American Conservatory Theater and Guthrie Theater; X’s and O’s (A Football Love Story) at Berkeley Repertory Theatre; Superheroes at Cutting Ball Theatre; The Christians at Actors Theatre of Louisville; and Hamlet at California Shakespeare Theater. Rodriguez is the recipient of a 2004 Princess Grace Award. 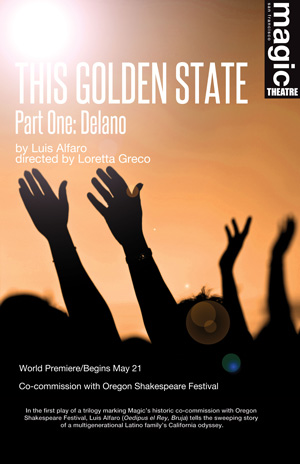