Am I my brother’s keeper? After a homecoming in the bayous of Louisiana, the Size brothers, Ogun and Oshoosi, try to start fresh.  This haunting, funny, and heartbreaking tour-de-force by Tarell Alvin McCraney probes sexuality, coming of age, and the bonds of family.  The Brothers Sizemarks the emergence of a major new voice in American theatre.

The Brothers Size is the second play of Tarell Alvin McCraney’s The Brother/Sister Plays, a trilogy presented across the Bay Area by Magic Theatre, A.C.T., and Marin Theatre Company this fall.

The deeply American plays of Tarrell Alvin McCraney’s Brothers/Sisters Trilogy could not have taken place anywhere else than the disaster-stricken state of Louisiana. Yet they feel so elemental, so utterly mythic and primal. They stand out of time, in that long second between the thought and the deed, between past and future, between life and the life beyond. The Brothers Size is the second play of this trilogy and it seems smaller and simpler in scope in comparison to the other two plays. But it is in fact the nexus of the series, the heart of McCraney’s thesis on Black American brothersistermotherfatherloverhood. Three men, two brothers and a lover, or two lovers and another, struggle to understand the unspoken bonds between them, the ties of blood tangled in the ties of love, as expectation collides with desire. The play is set in an auto mechanic’s garage but the fine blend of Yoruban folklore, ancient Greek myth, Garcia-Lorcan sense of tragic inevitability and good ol’ Louisiana git-down convert the garage into an altar for the ceremony of manhood.

Read features and reviews of The Brothers Size:

"The muscular bodies of the actors do more than reflect the sinewy force of the playwright's words: They're handsome prisons for the spirits of three strong, troubled African American men desperately trying to understand, weigh and express the feelings they have for each other. The contact made is almost inexpressibly moving and heartbreaking at the same time."
— Robert Hurwitt, San Francisco Chronicle

It’s what people must have felt during productions of the early works of Eugene O’Neill in the 1920's or Sam Shepard in the 1960's… It is said of one character in this gorgeous trilogy…that she "breathes like the wind." So do Mr. McCraney’s plays, which are pumped full of a senses-heightening oxygen that leaves you tingling.
— Ben Brantley, The New York Times

"By the second page, I said, 'We're doing his work,''' [Emily Mann, McCarter's artistic director] says. "His use of language is absolutely distinctive. If you gave me two lines, I'd know they were his. He reminds me of [Federico García] Lorca, Nilo [Cruz], Tennessee Williams, but he's absolutely himself. He's a theatrical poet. His work is very musical and funny--and it can rip your heart out.''
— Christine Dolen, The Miami Herald

Tarell Alvin McCraney (Playwright)'s plays include Wig Out! (developed at the Sundance Institute Theatre Lab, produced in New York by Vineyard Theatre and in London by the Royal Court Theatre) and the trilogy entitled The Brother/Sister Plays, which includes: The Brothers Size (simultaneously premiered in New York at The Public Theater in association with The Foundry Theatre and in London at the Young Vic, where it was nominated for the Olivier Award for Outstanding Achievement in an Affiliate Theatre); In the Red and Brown Water(winner of the Alliance Theatre’s Kendeda Graduate Playwriting Competition, produced at the Alliance Theatre and the Young Vic); and Marcus; or the Secret of Sweet. His other plays include Without/Sin and Run, Mourner, Run (adapted from Randall Kenan’s short story), both of which premiered at the Yale Cabaret.  In the summer of 2006, McCraney, Catherine Filloux, and Joe Sutton wrote The Breach, a play about Katrina, the Gulf, and our nation, commissioned by Southern Repertory Theater, where it premiered in August 2007 to mark the two-year anniversary of the tragedy in New Orleans. The Breach also played at Seattle Repertory Theatre in the winter of 2007. McCraney attended the New World School of the Arts High School in Miami, Florida, receiving the Exemplary Artist Award and the Dean’s Award in Theater. He holds a B.F.A. in acting from DePaul University. McCraney is a May 2007 graduate of Yale School of Drama’s playwriting program, where he received the Cole Porter Playwriting Award upon graduation. He is the Royal Shakespeare Company’s international writer in residence, the 2009 Hodder Fellow at Princeton University, and the recipient of Vineyard Theatre’s 2007 Paula Vogel Playwriting Award and a 2007 Whiting Writers’ Award. He is currently under commission at Manhattan Theatre Club and Berkeley Repertory Theatre and is a member of New Dramatists and Teo Castellanos D-Projects in Miami. In 2008, McCraney was the recipient of London’s Evening StandardAward for Most Promising Playwright.

Octavio Solis (Director) is a playwright and director living in San Francisco. His works Ghosts of the River, Quixote, Lydia, June in a Box, Lethe, Marfa Lights, Gibraltar, The Ballad of Pancho and Lucy, The 7 Visions of Encarnación, Bethlehem, Dreamlandia, El Otro, Man of the Flesh, Prospect, El Paso Blue, Santos & Santos, and La Posada Mágica have been mounted at the Mark Taper Forum, Yale Repertory Theatre, the Oregon Shakespeare Festival, the Denver Center for the Performing Arts, the Dallas Theater Center, the Magic Theatre, Intersection for the Arts, South Coast Repertory Theatre, the San Diego Repertory Theatre, the San Jose Repertory Theatre, Shadowlight Productions, the Venture Theatre in Philadelphia, Latino Chicago Theatre Company, the New York Summer Play Festival, Teatro Vista in Chicago, El Teatro Campesino, the Undermain Theatre in Dallas, Thick Description, Campo Santo, the Imua Theatre Company in New York, and Cornerstone Theatre. His collaborative works include Burning Dreams, cowritten with Julie Hebert and Gina Leishman and Shiner, written with Erik Ehn. Solis has received an NEA 1995-97 Playwriting Fellowship, the Roger L. Stevens award from the Kennedy Center, the Will Glickman Playwright Award, a production grant from the Kennedy Center Fund for New American Plays, the 1998 TCG/NEA Theatre Artists in Residence Grant, the 1998 McKnight Fellowship grant from the Playwrights Center in Minneapolis, and the National Latino Playwriting Award for 2003. He is the recipient of the 2000-2001 National Theatre Artists Residency Grant from TCG and the Pew Charitable Trust for Gibraltar at the Oregon Shakespeare Festival. Solis is a Thornton Wilder Fellow of the MacDowell Colony, a New Dramatists alum and a member of the Dramatists Guild.

Joshua Elijah Reese (Ogun Size) is thrilled to be making his debut performance on the west coast with Magic Theatre on such a wonderful project. Joshua, a native of Pittsburgh, PA, is a graduate of Point Park University: B.F.A. Theater, Dance minor. Other regional credits include: The Brothers Size (Elegba), the world premiere of When January Feels like Summer(Devaun), and Flight (Nate) with Pittsburgh’s City Theater, Jitney (Youngblood) and James McBride (James McBride) with the Pittsburgh and Playwrights Theater, Julius Caesar(Octavius Caesar) with the Pittsburgh  Irish and Classical Theater. Television credits includeThe Kill Point and Three Rivers (Pilot). Film credits include One for the Money, Unstoppable,Homecoming, and Riddle. www.JoshuaElijahReese.com

Alex Ubokudom (Elegba) is making his debut appearance on the Magic Theatre stage in The Brothers Size. Born and raised in Detroit, MI, Alex recently graduated from the American Conservatory Theater’s Grad Acting Program. At A.C.T. he had the privilege of playing such roles as Banquo in Macbeth, Hamlet, Sam Thomas in Blues for an Alabama along with a host of other characters. In 2010 he worked the Stanford Summer Theater, where he played Odysseus and Achilles in The Wanderings of Odysseus and as participated in the reading of Derek Walcott’s classic poem Omeros.

Tobie Windham (Oshoosi Size) is very excited to be apart of this epic trilogy happening in the Bay area. He was recently seen in Pastures of Heaven at California Shakespeare Theater and A Christmas Carol at A.C.T. Other credits include American Buffalo with City Equity Theater, Romeo and Juliet with Birmingham Park Players, and The Two Real Coons with Renovation Theater. Mr. Windham is a native of Birmingham Alabama where he earned his B.A. from the U of A at Birmingham. He is a recent graduate of The American Conservatory Theater M.F.A. Program in Acting, where he appeared in many productions. He would like to thank his baby brother, Terrence Windham, for constant inspiration and love. 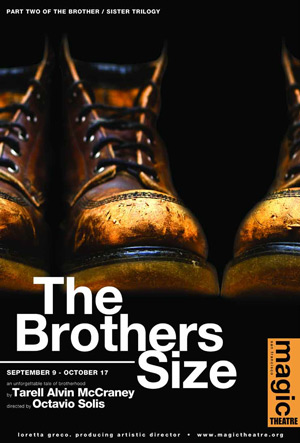