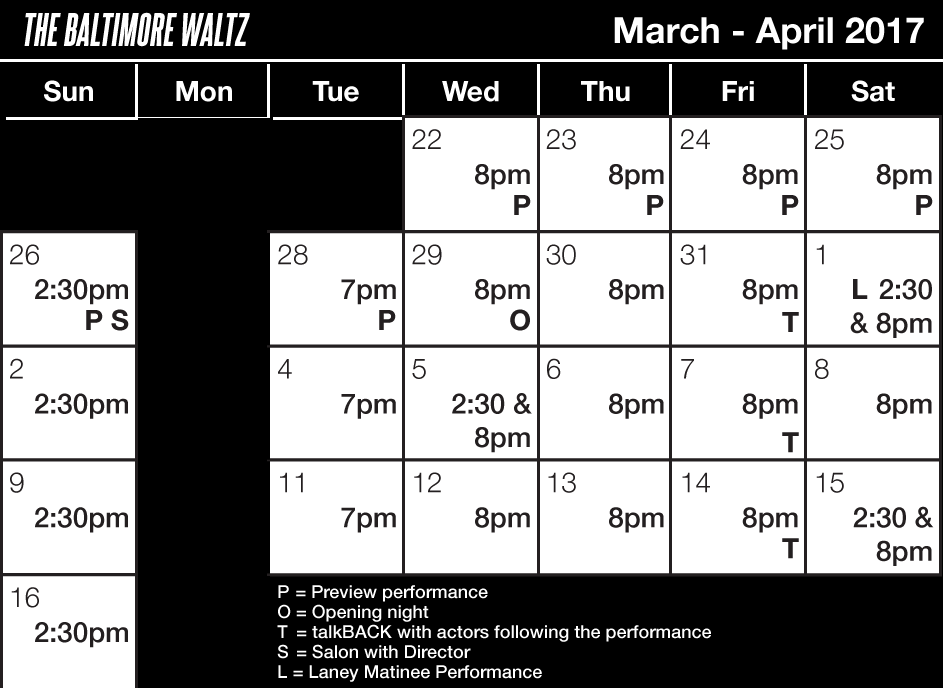 [click here for more information about Laney College performances]
The Baltimore Waltz is now closed - thank you for your interest and patronage!

Paula Vogel’s fantastical satire takes us on a whirlwind odyssey through Paris, Amsterdam, Munich and Vienna in search of romance and a cure.  Part heartfelt tribute and part political indictment, this groundbreaking work from the beloved Pulitzer Prize winner was given its West Coast premiere at Magic in 1992.

"The show’s giddiness helps it soar past the limitations of realism."

"The Baltimore Waltz puts forth one of American drama’s most poignant, most lavishly theatrical visions of sibling bond, of sickness, of grief."
-San Francisco Chronicle

How I Learned to Drive, The Long Christmas Ride Home (The Vineyard); Don Juan Comes Home from Iraq (Wilma Theater); A Civil War Christmas (Long Wharf, New York Theatre Workshop); The Mineola Twins (Roundabout); Hot ‘n’ Throbbing (A.R.T., Signature Theatre); The Baltimore Waltz, Desdemona, And Baby Makes Seven (Circle Rep); The Oldest Profession (Signature Theatre). Awards include the Pulitzer Prize, two Obies, the NY Drama Critics Circle, Theatre Hall of Fame, Dramatists Guild Lifetime Achievement, and The Thornton Wilder Award. She is most honored by three awards given in her name: the Paula Vogel Award at the American Theatre College Festival, the Paula Vogel mentorship program for Philadelphia Young Playwrights, and the Paula Vogel Playwriting Award given by the Vineyard Theatre. After teaching for 30 years at Brown University and Yale School of Drama, she now conducts workshops at theatres, schools, and community organizations. Upcoming projects: Jitterbugging and the War Effort (Long Wharf), Baby Girl, a musical theatre work with Matt Gould, and the book, How to Bake A Play.

Jonathan Moscone is the Chief of Civic Engagement at Yerba Buena Center for the Arts, ​where - through creative placemaking, youth programming, political advocacy and community partnerships - Jonathan ​​activates YBCA’s mission in the public realm. His previous Magic credits include The Happy Ones​, The Pharmacist's Daughter​ and Kingfish. ​P​reviously ​he ​served as Artistic Director of California Shakespeare Theater for 15 years​, where his credits include​ Charles Ludlam's The Mystery of Irma Vep, Shaw’s Pygmalion​, Dickens' The Life and Adventures of Nicholas Nickleby ​and ​Shakespeare's Twelfth Night. His other credits include Tribes at Berkeley Rep, and the world premiere of Ghost Light, which he co-created and developed with playwright Tony Taccone for Oregon Shakespeare Festival and Berkeley Rep. In addition, he directed Bruce Norris’ Clybourne Park for American Conservatory Theater​. At Cal Shakes​ he brought writers such as Zora Neale Hurston, Octavio Solis​ and Amy Freed, along with a broad array of writers of the canon of world theatrical literature, under the direction of many of our country’s most inventive and passionate directors. He is the first recipient of the Zelda Fichandler Award, given by the Stage Directors and Choreographers Foundation for “transforming the American theatre through his unique and creative work.” His regional credits include​:​ Huntington Theatre, Alley Theatre, Milwaukee Repertory Theater, Dallas Theater Center, ​Intersection for the Arts, among others. Jonathan has served on panels for the National Endowment for the Arts and the Massachusetts Arts Council,​ and he currently serves on the boards of Californians for the Arts and California Arts Advocates, as well as on the national board of Alice Waters' Edible School Yard Project.

Lauren English* (Anna)
is excited to be back at The Magic where she was last seen as Lily in The Legacy Revival of Why We Have a Body. Most recently, she became a mom. Before that, she played Sally in Talley's Folly at The Aurora Theatre. Locally, she has worked at California Shakespeare Festival, Word for Word, Marin Theatre Company, Marin Shakespeare Company, among others. Lauren is a founding member and Artistic Associate at The SF Playhouse. Favorite onstage roles there include: Kate in Seminar, Pilot in Grounded, Steph In reasons to be pretty, Sally in Cabaret, Emily in Our Town and Lisa in The Glory of Living. Selected New York Theater performance credits: TACT's Off Broadway Production of The Cocktail Party, Hamlet at the Shakespeare Theatre of New Jersey, and The Idealist at The New York Times Theatre. Also in NY she worked at The Public Theater, Ensemble Studio Theater, Lark Theatre and Playwrights Realm. MFA, NYU Grad Acting.  She would like to dedicate her performance to her hero, the late Zelda Fichandler. www.laurenenglish.net

is so excited to be back at Magic! Other theater credits include runboyrun, And I And Silence, Hir, Arlington, Every Five Minutes, The Happy Ones, Terminus, Se Llama
Cristina, and Any Given Day (Magic Theatre); It Can't Happen Here (Berkeley Repertory Theatre); Monstress, Love and Information (A.C.T.); A Raisin in the Sun, Blithe Spirit, Much Ado About Nothing, The Verona Project, and Pastures of Heaven (California Shakespeare Theater); Hookman (Encore Theatre Company); Hare and Tortoise (Marin Theatre Company); and very still and hard to see (A.C.T. Master of Fine Arts Program). Hogan has a B.A. in theater arts from Saint Mary’s College of California.

has had designs seen at A.C.T., California Shakespeare Theater, Shotgun Players, The San Francisco Playhouse, San Jose Repertory Theatre, Aurora Theatre Company, Santa Cruz Shakespeare, Center REP, Z Space, among many others. Recent honors include a TBA award for The Nether at SF Playhouse, SFBATCC awards for My Fair Lady at SF Playhouse and Metamorphosis at Aurora Theatre, a Broadway World San Francisco Award for Care of Trees at Shotgun Players, and a Shelly Award for her design of Mirandolina at CenterREP.  Ball is also a company member of Shotgun Players. In addition to theatre, Ball also works as a production designer in film and television. Upcoming projects include Phedre at Cutting Ball, As You Like It at Cal Shakes and The Roommate at SF Playhouse.

came to San Francisco to work with Jon at the Magic 20 years ago on The Pharmacist's Daughter and is still here. Recent work includes costumes for Hand to God, It Can't Happen Here at Berkeley Rep, and Party People at the Public Theater NY. She has designed many productions for Berkeley Rep, California Shakespeare Theater, Oregon Shakespeare Festival, as well as at Marin Theatre Company, Southcoast Rep, The Guthrie, Yale Rep, Hartford Stage, Center Stage, San Jose Stage, ACT, Joe Goode Performance Group, Chicago Opera Theater, The Atlantic Theater Company, Dallas Theater Company, Portland Stage, Second Stage, NY and BAM.  Meg is a graduate of the Yale School of Drama and resides in Mill Valley with her family.

is a Chicago based lighting designer, where her work has been seen on many stages including The Hypocrites, the Goodman Theatre, Steppenwolf Theatre, Court Theatre, Steep Theatre, Victory Gardens Theatre, Writers’ Theatre, Northlight Theatre, and countless storefronts all over the city. Her regional credits include Oregon Shakespeare Festival, American Repertory Theater, Kansas City Rep, Milwaukee Repertory Theater, Huntington Theatre, Williamstown Theatre Festival, Alley Theatre, Berkeley Rep, and Actors Theatre of Louisville. International credits include the Almeida in London and the Singapore Repertory Theatre. Heather was a recipient of the NEA/TCG Career Development Grant and the 3Arts Award. Heather serves as the head of lighting design at Columbia College Chicago, and received her MFA at the Theatre School at DePaul. Heather is a member of The Hypocrites.

is a San Francisco Bay Area native and is thrilled to be making his debut at the Magic Theater. He had designed sound and video for many theater companies in the Bay Area including Marin Theater Company, Shotgun Players, San Francisco Playhouse, Mugwumpin, Aurora, and many more. In addition to design work Theodore curates a monthly event, Klanghaus, showcasing the work of local performing and visual artists in an immersive environment, for which he received a Theater Bay Area CA$H grant in 2016. He graduated with Honors from San Francisco State University in 2012. For more information and sounds visit:
http://theodore-hulsker.squarespace.com

continues her work with Magic Theatre after coaching Sojourners and runboyrun in 2016 and co-coaching Fred’s Diner in 2015.  Jessica has taught and led workshops at the Royal Shakespeare Company, U.C. Berkeley, Academy of Art University, and in A.C.T.’s Summer Training Congress.  Recent coaching credits include, Hand to God (Berkeley Rep), August: Osage County, Miss Bennet: Christmas at Pemberley, and Native Son (Marin Theatre Company), Fences (Cal Shakes), and Jerusalem (SF Playhouse).  Jessica holds an M.A. from the Birmingham School of Acting, and an M.F.A. in Voice Studies from the Royal Central School of Speech and Drama.