written and directed by John Kolvenbach

Join us for a heartwarming comedy by Magic Theatre audience favorite John Kolvenbach (Mrs. Whitney, Goldfish). Anna will do anything to make her sister Lilly happy, including destroying all her relationships. When Lilly, Anna, and her husband Malcolm retreat to their late father’s cabin in Cape Cod, they expect to relax, unwind, and take stock. But when a charming but shadowy drifter enters the picture angling for Lilly’s heart, their pilgrimage takes a surprising turn. This production is presented as part of a Rolling World Premiere with Harbor Stage Company.

"Sister Play is is why live theater can be so remarkable. You don’t soon forget a play like this." CLINTON STARK –Stark Insider

"One of the joys of Kolvenbach’s script is the creative density of the family dynamics, played with deliciously all-out commitment and turn-on-a-dime nuance by the actors." ROBERT HURWITT –San Francisco Chronicle

John Kolvenbach (Playwright/Director) is the author of Goldfish, Mrs. Whitney, Love Song, on an average day, Gizmo Love, Fabuloso, Bank Job and Marriage Play  (or Half ‘n Half ‘n Half)  which  premiered in 2012 at Merrimack Repertory. Goldfish premiered at South Coast Repertory in the Spring of 2009, directed by Loretta Greco. Goldfish was then produced at the Magic Theatre in San Francisco in the Fall of that year. The Magic also premiered Mrs. Whitney in the Fall of 2009, under Kolvenbach’s direction. Love Song premiered at Steppenwolf in Chicago in the spring of 2006, directed by Austin Pendelton. Love Song went on to the West End, where it was nominated for an Olivier Award, best new comedy. The London production was directed by John Crowley, with Neve Campbell, Cillian Murphy, Kristen Johnston and Michael McKean. Love Song has been produced in New York, Zurich, Melbourne, Sydney, Wellington, Seoul and Rome. There have been over fifty productions in the US.  on an average day premiered at the Comedy Theatre on the West End in 2002, with Woody Harrelson and Kyle MacLachlan, also directed by Mr. Crowley. Average Day has been produced in Tel Aviv, Buenos Aires, and Lisbon among many other places.  Fabuloso premiered at the Wellfleet Harbor Actor’s Theatre in 2008, directed by Mr. Kolvenbach. Fabuloso was staged in San Juan and Zurich, in Spanish and Swiss German, respectively.

Anthony Fusco* (Malcolm) a member of Actors Equity since 1984, is delighted to be back at The Magic, having performed here in the Traveljng Jewish Theatre’s production of The Chosen twelve seasons ago. Since arriving in San Francisco from NYC in 1999, Fusco has been among the Bay Area’s busiest actors, appearing in close to fifty productions. A few favorites include Indian Ink, Clybourne Park, The Homecoming, At Home at the Zoo, Dead Metaphor, Hedda Gabler, The Three Sisters, Race, November, and The Rainmaker at ACT (where he is an Associate Artist); Pygmalion, Candida, Arms and the Man, The Tempest, King Lear, and The Importance of Being Earnest at CalShakes; and The Intelligent Homosexual’s Guide to Capitalism and Socialism with a Key to the Scriptures and Vanya & Sonia & Masha & Spike at BerkeleyRep. Fusco appeared in The Real Thing on Broadway, in many off- (and OFF-off!) Broadway shows, and at regional theaters across America. He trained at Juilliard and The Barrow Group, and could do none of what he does without Martha. www.anthonyfusco.actor

Jessi Campbell* (Lilly) is very happy to be returning to the Magic once again. Jessi has worked in theater, film, and TV in NYC and San Francisco. She most recently played Beth in A Lie Of The Mind and Dee in And I And Silence at the Magic Theatre. Other favorite acting credits include: Blackbird (American Conservatory Theater), Speed-the-Plow (American Conservatory Theater), Inky (Women’s Project), Victoria Martin: Math Team Queen (Women’s Project), Commedia Dell Smartass (Ohio Theatre) and Lascivious Something (Cherry Lane Theater).  She would like to give special thanks to Loretta and all the folks at Magic. What a season! She received her B.F.A. in Acting from The Theatre School at DePaul University. Member of AEA and SAG.

Patrick Kelly Jones* (Man) has appeared with Magic in Buried Child as well as several other readings and workshops. Select regional credits include Cymbeline and Misalliance (New York Classical Theatre); Step One: Plays With Instructions (The 52nd Street Project, NYC); You Can't Take it With You (Denver Center for the Performing Arts); Peter and The Starcatcher, Water by the Spoonful (TheaterWorks),  Bellwether, Failure: A Love Story (Marin Theatre Company); The Lieutenant of Inishmore (Florida Studio Theatre), Vincent in Brixton, Hay Fever (The Cleveland Play House). He has worked with several other Bay Area theaters including The Aurora, Shotgun Players, Crowded Fire, the San Francisco Playhouse and Just Theater. Mr. Jones earned his MFA in Acting from Case Western Reserve University/Cleveland Play House. www.patrickkellyjones.com

Gillian Confair* (Stage Manager) is excited to return to Magic Theatre once again. Previous Magic credits include Every Five Minutes, pen/man/ship, and Bad Jews. Other local credits include Around the World in Eighty Days at Marin Theatre Company; Darling, Show Choir, and Homefront with the A.C.T. Young Conservatory; The Soldier’s Tale, a collaboration between A.C.T. M.F.A. Program and San Francisco Conservatory of Music; You, Nero (Production Assistant) with Berkeley Repertory Theatre; and Twelfth Night (Production Assistant) at California Shakespeare Theater. She is a proud alumna of Bryn Mawr College.

Jeff Rowlings (Lighting Designer) is a San Francisco based producer, production manager and designer. He was Production Manager for American Conservatory Theater (2001-2012), Production Manager and Resident Designer for Magic Theatre (1985-1995) and Producing Director for San Diego REP (1996-1998). Jeff co-founded Foghouse Productions which produced Culture Clash Anthology in San Francisco and Los Angeles. Foghouse produced the commercial world premiere of R. Buckminster Fuller: The History (and Mystery) of the Universe in San Francisco, Chicago and Seattle.  Jeff produced the world premiere of Brenda Wong Aoki’s MU and produced and designed the world premiere of Liberty Bradford Mitchell’s The Pornographer’s Daughter.  Most recently he designed lights for the World Premiere of Arlington at Magic and designed sets for the World Premiere musical, The Cable Car Nymphomaniac.

Sara Huddleston (Sound Designer) joined Magic staff in March ’07. For Magic, selected designs include A Lie of the Mind, And I And Silence, pen/man/ship, Every Five Minutes, Hir, Arlington, Terminus, Se Llama Cristina, Any Given Day, What We’re Up Against, Or, The Brothers Size, An Accident, Mrs. Whitney, Goldfish, Mauritius, Evie’s Waltz, The K of D and Octopus (Magic/Encore Theatre Company). Further Bay Area sound design credits include In On It and T.I.C (Encore Theatre Company); The Shaker Chair (Encore Theatre Company/Shotgun Players); Macbeth (Shotgun Players); Three on a Party (Word for Word); A Round Heeled Woman (Z Space); Invasion! and 410 [Gone] (Crowded Fire). Ms. Huddleston received a B.F.A from the Carnegie Mellon School of Drama. 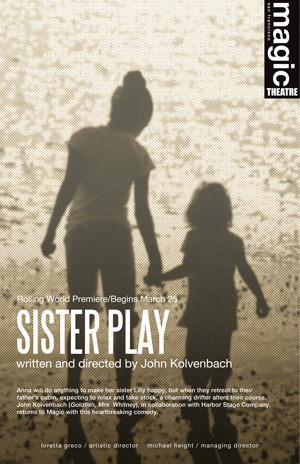