Aphra Behn is getting out of the spy game and into showbiz. If she can finish her play by morning, she’ll become the first professional female playwright. All that’s standing in her way are King Charles II, actress Nell Gwynne, and double agent William Scot, who may or may not be trying to murder the king. Double-crossing, cross-dressing, sex, art, and politics all come together in playwright Liz Duffy Adams’ hilarious bodice-ripper that peers into the life and times of the literal first lady of the stage.

One of the most delightful, intelligent, and witty shows we have seen in ages.
— Douglas Konecky, SF Theater Blog

Frivolity and substance. It's definitely not an either Or, situation.
— Chad Jones, Theater Dogs

Liz Duffy Adams (Playwright) is a New Dramatists alumna (2001-2008) and a recipient of a New York Foundation for the Arts Fellowship Award, a Will Glickman Playwright Award, a Frederick Loewe Award in Music Theatre, a Weston Playhouse Music Theater Award, and a commission from Children's Theater Company, Minneapolis. Her work has been produced, or developed at the Humana Festival, The Women's Project, Portland Center Stage, Portland Stage Company, Syracuse Stage, Bay Area Playwrights Festival, New Georges, Shotgun Players, Moxie Theater, Clubbed Thumb, and Crowded Fire Theater. She has received residencies form MacDowell Colony, Djerassi Resident Artists Program, and Millay Colony for the Arts. Publications include Poodle With Guitar And Dark Glasses in Applause's "Best American Short Plays 2000-2001," numerous short plays and monologues in anthologies from Heinemann and Smith & Kraus, and several plays published by Playscripts, Inc. Adams was profiled in American Theatre magazine's December 2004 issue. She holds a BFA from NYU's Experimental Theater Wing and an MFA from the Yale School of Drama.

Maggie Mason (Jailer/Nell Gwynne/Maria /Lady Davenant) Maggie is proud to be a part of this wonderful production and to be working at the Magic. Other recent Bay Area credits include Possibilidad with the San Francisco Mime Troupe (dir. Wilma Bonet); Rock 'n' Rollwith San Jose Stage; Hamlet and As You Like It at Pacific Repertory Theatre (dir. Ken Kelleher); You, Nero (dir. Sharon Ott) and Arabian Nights (dir. Mary Zimmerman) at Berkeley Repertory Theatre; Future Me with TheatreFIRST (dir. Dylan Russel); Oskar the Bully at TheatreWorks (dir. Mary Sutton); The Heavy Hand at StageWerx (dir. Noona Nolan); andTranslations, The Collection, and The Applicant with Stanford Summer Theatre (dir. Ed Iskandar). She graduated from Stanford University, where she was a founding member, and later Artistic Director, of the Stanford Shakespeare Society. Originally from England, Maggie was a lead for three years on the BBC television drama Grange Hill, one of the longest running shows on the BBC.

Natacha Roi (Aphra Behn) Her recent theatre credits include Emilie – La Marquise Du Chatelet Defends Her Life at the Petit Theatre at Cirey Tonight, The Real Thing, and Vesuviusat South Coast Repertory. On Broadway she appeared in Sixteen Wounded, Closer, and Wait Until Dark. Some of her Off-Broadway and regional theatre credits include Fiction at Roundabout Theatre Company; Uncle Vanya at the McCarter Theatre and La Jolla Playhouse; Twelfth Night at Long Wharf Theatre; Othello at The Public Theater; Passion Playat Minetta Lane Theatre; Closer at Berkeley Repertory Theatre; The Game of Love and Chance at Seattle Repertory Theatre; A Doll's House and The Notebook of Trigorin at Cincinnati Playhouse in the Park; The House of Bernarda Alba and Change of Heart at the McCarter Theatre; Hamlet at Huntington Theatre Company; Six Characters in Search of an Author, King Stag and The Oresteia at American Repertory Theatre; Three Birds Alighting on a Field at the Manhattan Theatre Club; and The Merchant of Venice at Hartford Stage. Television credits include: The Beast, Journey Man, E.R, Bones, The Unit, Without a Trace, Hack, Ed, Law & Order, Law & Order: SVU. Natacha is a member of AEA, SAG, and AFTRA. Visit her at www.natacharoi.com.

Megan Q. Sada (Stage Manager) is thrilled to be the Stage Manager for Or,. Most recently at Magic, Megan served as the Stage Manager for The Brothers Size, Oedipus El Rey and Goldfish. Favorite productions include Lydia (Marin Theatre Company), Round and Round the Garden (A.C.T.), Culture Clash's 25th Anniversary Show (Brava Theater Center), The Last Five Years ( The Studio Theatre, Detroit, MI) and Mrs. Shakespeare (The Cherry Hill Theater, Canton, MI). Megan graduated from Wayne Stage University in Detroit, MI with a B.F.A. in Theatre where she Stage Manged and Directed often. Megan would like to thank her friends, family, and especially her wife, Ginger, for their continuing love and support! 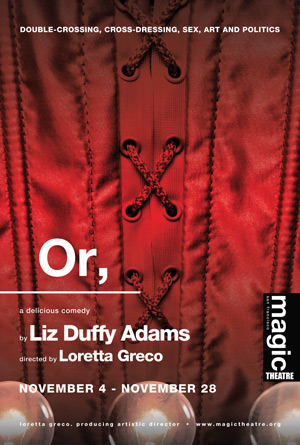