MAGIC THEATRE IS EXCITED TO ANNOUNCE THAT THE WEST COAST PREMIERE OF BRIGHT HALF LIFE WILL BE FEATURED AT NEWLY RENOVATED  THE RUEFF AT THE STRAND THEATRE IN DOWNTOWN SAN FRANCISCO.

The Reviews are in for Tanya Barfield’s Bright Half Life

“…its telling embodies the reality of our lives, in which any moment in the present may be electrified, undermined or simply informed by flashbacks to a shared past.” “..the spare, incisive poetry of Barfield’s writing exerts a pretty strong pull.”
-The San Francisco Chronicle

“In Tanya Barfield’s engaging new play… two attractive and articulate women meet at work in their twenties, date secretly, fall in love, have children, get married (when it becomes legal), fight a lot, split, and, separately, watch their kids grow up. This well-written portrayal of smart women finding, losing, and finding themselves and each other again is profound.”

“Tanya Barfield’s new play Bright Half Life commences catapulting through a romance. Barfield’s fluid drama time-travels across a long-term relationship, fast-forwarding to its end and flashing back to its origins with few markers to divide scenes.”

“Bright Half Life is the rare play you actually wish went on longer…the actresses’ easy rapport seems comfortable and real – like the best love stories.” 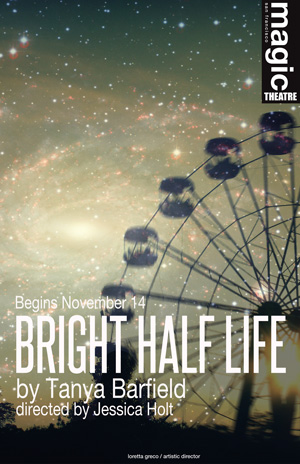